Arcanum: Of Steamworks and Magick Obscura Wiki
Register
Don't have an account?
Sign In
Advertisement
in: Article stubs, Characters, Followers

This article is a stub. You can help Arcanum: Of Steamworks and Magick Obscura Wiki by expanding it.

Dante is one of the Living One's potential followers. He can be found loitering in The Sour Barnacle tavern in Black Root.

Dante can be found drowning his sorrows in the Sour Barnacle in Black Root. He has fallen out of favor with King Praetor of Dernholm who could previously have tasked the player with collecting Black Root's taxes. If the player makes this task known to Dante then he will see this as an opportunity to regain the favor of the king and offer his services to the player. When the player then turns in the taxes to the king, they are presented with the opportunity to speak for Dante, in which case he will leave the party. His reaction is unaffected by beauty.

Dante will join as a companion if the player has a non-evil alignment and is currently collecting taxes on behalf of the king of Cumbria. He will leave the party if the player's alignment goes below zero. 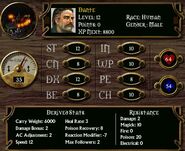 Dante in The Sour Barnacle tavern in Black Root
Community content is available under CC-BY-SA unless otherwise noted.
Advertisement