Arcanum: Of Steamworks and Magick Obscura Wiki
Register
Don't have an account?
Sign In
Advertisement
in: Countries and polities

The Kingdom of Arland (or Arland for short) is a smaller country in the south and extended southwest of the main Arcanum continent. The country is a monarchy and its largest city and capital is Caladon.

Unlike the Kingdom of Cumbria's stark current opposition to modern technology, Arland is more welcoming of a potential symbiosis between the ways of magick and technology in its economy and the daily lives of its people.

Halfway through the game it is revealed that Arland is finalising the process of acceding to the Unified Kingdom, with issues such as it's military, trading routes, currency and farming tarifs being the most pressing (and unresolved) issues.

The known settlements of Arland.

Though there are few things that would suggest Arland having any inspiration in the real world's Ireland or Scotland (Caledonia), the names "Arland" and "Caladon" certainly evoke the two real countries.

Additionally, Arland seems to have built up its own tradition of scientific and technological research, which is somewhat reminescent of the golden age of Scottish science and philosophy in the 18th and 19th century, before and during the industrial revolution. The more overt parallels end there. 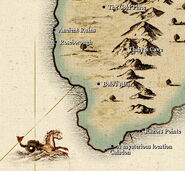 The kingdom's location on the continent

Bird's eye view map of Caladon, the capital of Arland