Arcanum: Of Steamworks and Magick Obscura Wiki
Register
Don't have an account?
Sign In
Advertisement
in: Regions 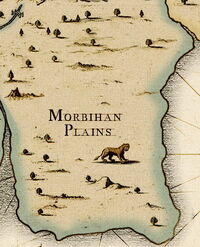 The Morbihan Plains are a large, mostly lowland region of the continent of Arcanum, in the central eastern portion of the landmass.

Tarant, the capital and largest city of Unified Kingdom and the largest city of the entire continent, lies at the mouth of a great river that forms the western boundary of the Morbihan Plains.

Ashbury is the largest town on the eastern coastline of the Plains. Stillwater is a town on the northern edges of the Plains, under the Grey Mountains. There are also some villages, such as Vooriden.

Community content is available under CC-BY-SA unless otherwise noted.