Arcanum: Of Steamworks and Magick Obscura Wiki
Register
Don't have an account?
Sign In
Advertisement
in: Followers, NPC, Characters

Virgil is a Panarii priest and one of the first NPCs any player will encounter in the game at the Crash Site. He believes the player to be a reincarnation of an ancient legend and will automatically join the player party from the start of the game, unless the player goes to extensive lengths to convince him not to.

Virgil is a useful companion to have around unless and until you reach a technical aptitude of around 35 (then his spells will generally fail against you). Virgil is the most interesting follower in the game. He has a history that you'll slowly discover, and he adds the most dialogue of any of the followers.

Part-way through the game Virgil will leave the player character for personal reasons, and at a later point the player will arrive just in time to find him being killed. It is possible to resurrect Virgil, but he will have undergone a serious personality change. When you leave T'sen-Ang, if you have Virgil in your party, it's possible they'll take the opportunity to leave you. If the dark elves on the ground don't attack you then one of them will talk to you and leave automatically, but if the dark elves do attack you then they will only leave if you talk to them prior to exiting the area (you might need to climb up and down the stairs to trigger the conversation).  If Virgil leaves, you'll find him in the basement of the Sobbing Onion in Caladon (the trap door is in the room with Mr. Razzia). You'll probably have to resurrect him (you should find a scroll of resurrect in a chest there), but you'll finally learn Virgil's history, and you'll finally meet Brother Joachim. In early versions of the game, the episode caused Virgil to undergo a metamorphosis (among other things he lost all of his equipment and changed to level 25), but in the most recent version he remains exactly the same character. 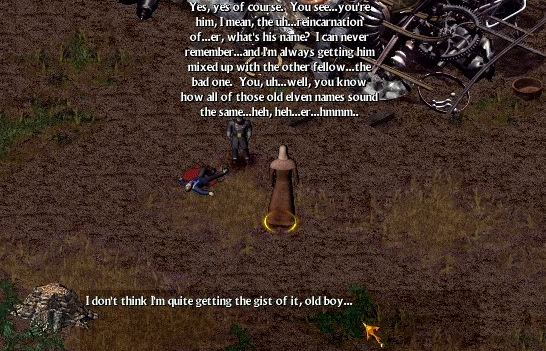